Tube, or Tubes, may refer to:

Tube (チューブ, chūbu) is a Japanese pop rock band formed in 1985. The members of the group are Nobuteru Maeda (前田亘輝), Michiya Haruhata (春畑道哉) Hideyuki Kakuno (角野秀行) and Ryoji Matsumoto (松本玲二). Tube members Maeda and Haruhata have composed for other artists under the Pipeline Project alias. Since the group released most of its songs in April to July, the catchphrase originated "Summer comes with Tube". 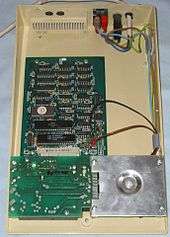 In computing, the Tube was the expansion interface and architecture of the BBC Microcomputer System which allowed the BBC Micro to communicate with a second processor, or coprocessor.

Under the Tube architecture, the coprocessor would run the application software for the user, whilst the Micro (acting as a host) provided all I/O functions, such as screen display, keyboard and storage devices management. A coprocessor unit could be coldplugged into any BBC Micro with a disk interface (whose ROM contained the necessary host software) and used immediately.

The 40-pin IDC "Tube" connector was a simple slave connection to the host processor's main bus, with 8 data lines, 7 address lines, and an interrupt input. The Tube protocols were implemented by hardware in the attached device.

Inside the coprocessor unit a proprietary chip (the Tube ULA, manufactured initially by Ferranti) interfaced and logically isolated the host and coprocessor buses. This allowed the Tube to work with a completely different bus architecture in the coprocessor unit. The only other active components needed were a microprocessor, some RAM, a small ROM containing processor specific client code, glue logic such as an address decoder and a power supply.